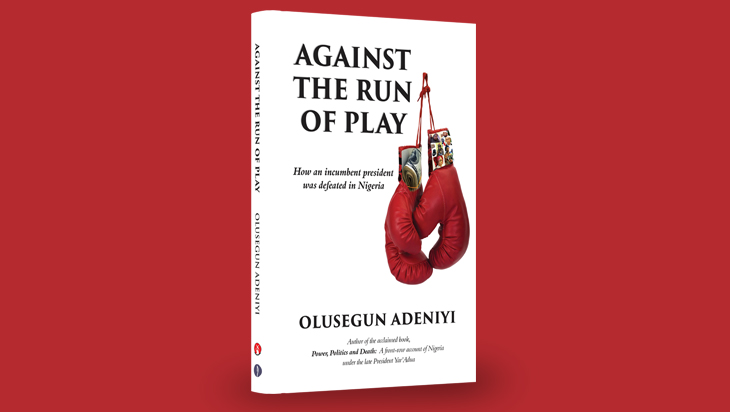 Against the Run of Play

Against the Run of Play takes an intense look at Nigerian politics at a time when an entrenched political party was defeated in a presidential election after 16 unbroken years in power. This book offers the reader a narrative explanation and an unusual insight into the major human and institutional factors that led up to the defeat of President Goodluck Jonathan in 2015.

Equally important is the author’s detailed recall of the major political developments that made the outcome inevitable while shaping the very expectations that brought President Buhari to power. Adeniyi enhances the credibility of his narrative through an extensive set of interviews with living key players in the drama he relates. The hindsight of these key players throws the events into bolder relief and illuminates the road ahead.

Read an excerpt from the book below.
If there is one issue on which the former President has serious misgivings, it is in the conduct of the 2015 general election and the disposition of the then INEC National Chairman, Prof. Attahiru Jega, whose neutrality Jonathan calls to question. “I was disappointed by Jega because I still cannot understand what was propelling him to act the way he did in the weeks preceding the election. As at the first week in February 2015 when about 40 percent of Nigerians had not collect­ed their PVCs, Jega said INEC was ready to go ahead with the election. How could INEC have been ready to conduct an election in which millions of people would be disenfranchised?”

According to Jonathan, even when he had a meeting with Jega to express his reservations about the preparedness of INEC, Jega was still adamant that they were ready and that the election would go ahead. “Of course the Americans were encouraging him to go ahead yet they would never do such thing in their own country. How could we have cynically disenfranchised about a third of our registered voters for no fault of theirs and still call that a credible election? The interesting thing was that the opposition also supported the idea of going on with an election that was bound to end in confusion.”

Jonathan, however, defended his government’s postponement of the election, maintaining that it was for security reasons. “When the military and security chiefs demanded for more time to deal with the insurgency, the reasons were genuine. As at February 2015, it would have been very difficult to vote in Gombe, Adamawa, Borno and Yobe States. But the moment all the arms and ammunition that had been ordered finally arrived, the military was able to use them to degrade the capacity of Boko Haram to the level in which they posed no threat to the election,” he explained.

On the huge sums of money allegedly taken by his National Se­curity Adviser, Col. Sambo Dasuki (retd.) in what has been dubbed in the media as the ‘Armsgate’ scandal, the former President demurred, saying he would not speak on it, since the matter was already before the court.

However, if there is anything that pains the former president, it is the way he says his wife and some officials of his administration are being treated by the Buhari administration. “I feel sad about the way my family is being hounded,” he lamented. “Society is like a building. You build it one block at a time. If every president decides to go in to dismantle what his predecessor did, society will never make progress. I expected President Buhari to correct whatever mistakes I may have made and then carry on from there. But a situation in which people go into exile for political reasons is not good for us.

According to Jonathan, Buhari had a good opportunity to instil a new order with the anti-corruption campaign that brought him to power and which resonated during the campaign. “His style of fight­ing corruption is different from mine and since most Nigerians appar­ently prefer his style, it is okay. There are steps you take that will help in retrieving ill-gotten wealth and punish offenders while restoring confidence in the system. But there are also things you can do to dam­age the system.”

Having shared with me his own concise review of what transpired at the election, Jonathan said he had seen enough to convince him that even if he had been declared winner, the bond of trust had been bro­ken between him and several people within his government. “I felt re­ally betrayed by the results coming from some northern states. Perhaps for ethnic purposes, even security agents colluded with the opposition to come up with spurious results against me. You saw the way the In­spector General of Police, a man I appointed, suddenly turned himself into the ADC to Buhari immediately after the election.”

The former president said he had projections before both the 2011 and 2015 presidential elections and he was sure of what would happen in each of the zones yet could still not fathom what happened in some states in 2015. “How could we have lost Ondo, Benue and Plateau States if our people were committed to the cause? If you ex­amine the results, you will see a pattern: in places where ordinarily we were strong, our supporters did not show enough commitment to mo­bilize the voters.” Jonathan expressed disappointment at some former allies, naming some names. “What happened was very sad not for me as a person, but for our democracy,” he admitted. “Take for instance, the PDP National Chairman, Alhaji Adamu Mu’azu. I believe he joined in the conspiracy against me. For reasons best known to him, he helped to sabotage the election in favour of the opposition.”